ICAO standards and consequently most regulatory jurisdictions state that pilots have an obligation to be ‘vigilant’ so as to see and avoid other aircraft – here is an example:

In many ways this has come to be seen as the last line of defence in collision prevention but we know that it fails. We need to understand why this is – what are the limitations to see and avoid?

Firstly, there are significant physical obstructions to a pilot’s line of sight, in the shape of the aircraft’s own structure. In fact a pilot’s field of view as permitted by the size and shape of the cockpit windows, only constitutes a small portion of the total sphere of airspace around him or her. In some aircraft the wings may also present a further external obstruction to their view. Moving one’s head may help mitigate for things like window posts but nothing will permit observations below, above or behind the aircraft. Pilots must understand that these are effectively blind spots to any see and avoid strategy.


We are well aware from eyesight tests that human vision varies substantially from one person to another. It is also true that an individual’s own visual acuity can vary with time of day, fatigue, light conditions etc. Those of us of a certain age also know that our eyesight deteriorates with the passing years… The likelihood of actually seeing a conflicting aircraft, even if it is within the field of view, is highly dependent upon the visual acuity of the observer and there is no consistent means to predict that.

We also know that the sensitivity of the retina varies across its surface. The point at which the lens focuses the image, the Fovea, is the most sensitive to colour and definition but this diminishes as distance from the Fovea increases. Our peripheral vision, what we see ‘out of the corner of the eye’ is relatively insensitive and is actually best at detecting motion across the arc of vision. This is recognised in the design of road traffic signals, which use not only a change of colour but a change of light source position to attract our attention – rather like the wig-wag lights on taxiways.

Another inherent visual factor is empty field myopia. At rest or in the absence of something to focus on, our eyes focus at approximately half a metre distance. This means that when looking at an empty sky, we may inadvertently be focused much too close and thereby compromise the ability to see another aircraft in the distance. Other effects like dirt on the windscreen can ‘trap’ the focus of the eye. It may be necessary to deliberately choose objects in the distance to draw the focus out to where the targets might be.

Pilots will be familiar with the effects of glare from a low bright sun – it is quite simply impossible to look in that direction let alone search for aircraft. Fighter pilots have always taken advantage of this to attack ‘out of the sun’. To make it worse pilots may be tempted to use sun visors or even charts and newspapers to block out the glare, thereby increasing the area physically blocked from view. Glare may also interact with atmospheric effects like dust, haze, mist and precipitation to increase their effect on the prevailing visibility. Whilst we know that VFR includes 5 kilometres of visibility, this can vary dramatically in different directions with the atmosphere and the light.

See and avoid may not be so hard if all we had to do was look out of the window. Unfortunately, or perhaps fortunately, pilots have many other things to do and cockpit workload often increases in the same places that traffic density increases. This allows less and less time for looking for aircraft precisely when there may be more to see. As with all cockpit activities pilots must be careful not to become so absorbed with one task as to forget to carry out another task, such as looking out.

There are a number of techniques recommended for more effective visual scanning. As well as moving the head, pilots can divide the field of view up into segments and scan each in turn in a systematic fashion. In the case of 2 pilots they might choose to search their ‘half’ of the sky. Focusing on objects in the distance may help avoid empty field myopia. Operators should research the various scan techniques and train the ones most suited to their operation and environment.

Finally let’s look at a couple of characteristics of distant visual targets. Firstly, the diagram on the left demonstrates that geometrically an aircraft on a collision course will maintain the same position in the field of view as it gets closer. This means that there will be no angular movement of the target across the field of view and therefore our peripheral vision will be less likely to detect it until it is very close. The aircraft that is going to hit you may be the hardest to see. 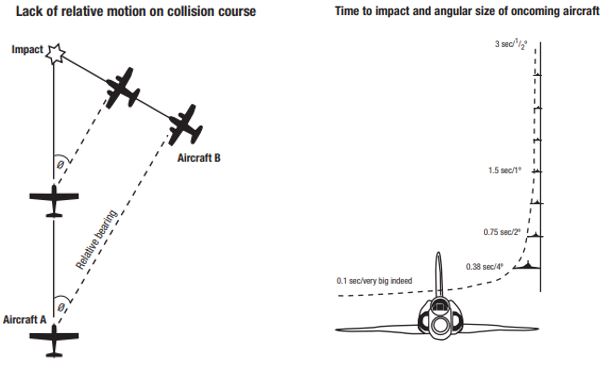 On the right is a diagram that shows the visual arc described by an aircraft closing head on. This model is based on a closing speed of 600 knots but even if we halve that, it indicates that a target may only describe an arc of half a degree in our vision, when only 6 seconds from impact. It is still only 1 degree at 3 seconds, when the ‘avoid’ part is out of the question.
Posted by Captain Jo Gillespie at 15:11

Captain Jo Gillespie
Director; Safety Management Advisor at Gates Aviation Limited. 30 years as a pilot and many more in safety management, Jo invites you to comment on his posts and add your own.